By the end of this section, you will be able to:

Understand the Meaning of Fractions

Andy and Bobby love pizza. On Monday night, they share a pizza equally. How much of the pizza does each one get? Are you thinking that each boy gets half of the pizza? That’s right. There is one whole pizza, evenly divided into two parts, so each boy gets one of the two equal parts. 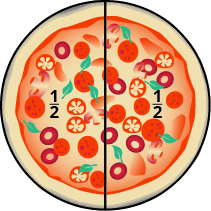 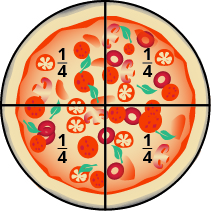 On Wednesday, the family invites some friends over for a pizza dinner. There are a total of 12 people. If they share the pizza equally, each person would get 1/12of the pizza. 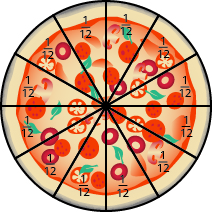 A fraction is a way to represent parts of a whole. The denominator b represents the number of equal parts the whole has been divided into, and the numerator a represents how many parts are included. The denominator, b, cannot equal zero because division by zero is undefined.

In Figure 4.2, the circle has been divided into three parts of equal size. Each part represents 13 of the circle. This type of model is called a fraction circle. Other shapes, such as rectangles, can also be used to model fractions.

In Example 4.1 and Example 4.2, we used circles and rectangles to model fractions. Fractions can also be modeled as manipulatives called fraction tiles, as shown in Figure 4.3. Here, the whole is modeled as one long, undivided rectangular tile. Beneath it are tiles of equal length divided into different numbers of equally sized parts.

We’ll be using fraction tiles to discover some basic facts about fractions. Refer to Figure 4.3 to answer the following questions:

What if we have more fraction pieces than we need for 1 whole? We’ll look at this in the next example.

In Example 4.4 (b), you had eight equal fifth pieces. You used five of them to make one whole, and you had three fifths left over. Let us use fraction notation to show what happened. You had eight pieces, each of them one fifth, 1/5, so altogether you had eight fifths, which we can write as 8/5. The fraction 8/5 is one whole, 1, plus three fifths, 3/5, or 1 3/5, which is read as one and three-fifths.

The number 1/35 is called a mixed number. A mixed number consists of a whole number and a fraction.

How can we use mathematics to change 12 into 48? How could you take a pizza that is cut into two pieces and cut it into eight pieces? You could cut each of the two larger pieces into four smaller pieces! The whole pizza would then be cut into eight pieces instead of just two. Mathematically, what we’ve described could be written as:

These models lead to the Equivalent Fractions Property, which states that if we multiply the numerator and denominator of a fraction by the same number, the value of the fraction does not change.

When working with fractions, it is often necessary to express the same fraction in different forms. To find equivalent forms of a fraction, we can use the Equivalent Fractions Property. For example, consider the fraction one-half.

Locate Fractions and Mixed Numbers on the Number Line

Now we are ready to plot fractions on a number line. This will help us visualize fractions and understand their values.

Fractions have opposites, too. The opposite of 34 is −34 . It is the same distance from 00 on the number line, but on the opposite side of 0.

We can use the inequality symbols to order fractions. Remember that a>ba>b means that aa is to the right of bb on the number line. As we move from left to right on a number line, the values increase.

In the following exercises, name the fraction of each figure that is shaded.1.

In the following exercises, draw fraction circles to model the given fraction.

Give an example from your life experienc (outside of school) where it was important to understand fractions.76.

Explain how you locate the improper fraction 21/4 on a number line on which only the whole numbers from 00 through 1010 are marked.

ⓐ After completing the exercises, use this checklist to evaluate your mastery of the objectives of this section.

ⓑ If most of your checks were:

…confidently. Congratulations! You have achieved the objectives in this section. Reflect on the study skills you used so that you can continue to use them. What did you do to become confident of your ability to do these things? Be specific.

…with some help. This must be addressed quickly because topics you do not master become potholes in your road to success. In math, every topic builds upon previous work. It is important to make sure you have a strong foundation before you move on. Whom can you ask for help? Your fellow classmates and instructor are good resources. Is there a place on campus where math tutors are available? Can your study skills be improved?

…no—I don’t get it! This is a warning sign and you must not ignore it. You should get help right away or you will quickly be overwhelmed. See your instructor as soon as you can to discuss your situation. Together you can come up with a plan to get you the help you need.

Previous Topic
Back to Lesson
Next Topic
Login
Accessing this course requires a login. Please enter your credentials below!
Lost Your Password?