By the end of this section, you will be able to:

In Evaluate, Simplify, and Translate Expressions, you learned that a term is a constant or the product of a constant and one or more variables. When it is of the form axm, where a is a constant and m is a whole number, it is called a monomial. A monomial, or a sum and/or difference of monomials, is called a polynomial.

polynomial—A monomial, or two or more monomials, combined by addition or subtraction

monomial—A polynomial with exactly one term

Here are some examples of polynomials:

Notice that every monomial, binomial, and trinomial is also a polynomial. They are special members of the family of polynomials and so they have special names. We use the words ‘monomial’, ‘binomial’, and ‘trinomial’ when referring to these special polynomials and just call all the rest ‘polynomials’.

Determine the Degree of Polynomials

In this section, we will work with polynomials that have only one variable in each term. The degree of a polynomial and the degree of its terms are determined by the exponents of the variable.

Degree of a Polynomial

The degree of a term is the exponent of its variable.

The degree of a constant is 0.

Let’s see how this works by looking at several polynomials. We’ll take it step by step, starting with monomials, and then progressing to polynomials with more terms.

Remember: Any base written without an exponent has an implied exponent of 1. 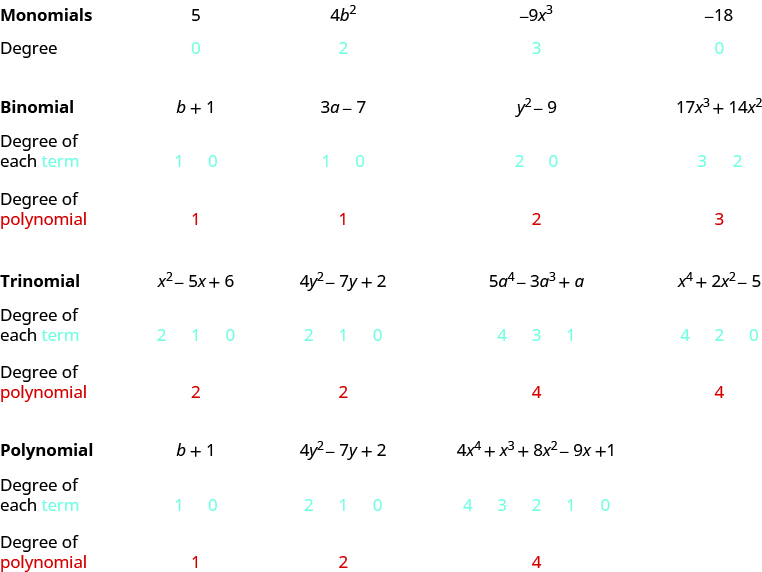 Working with polynomials is easier when you list the terms in descending order of degrees. When a polynomial is written this way, it is said to be in standard form. Look back at the polynomials in Example 10.2. Notice that they are all written in standard form. Get in the habit of writing the term with the highest degree first.

Parentheses are grouping symbols. When we add polynomials as we did in Example 10.6, we can rewrite the expression without parentheses and then combine like terms. But when we subtract polynomials, we must be very careful with the signs.

Evaluate a Polynomial for a Given Value

In The Language of Algebra we evaluated expressions. Since polynomials are expressions, we’ll follow the same procedures to evaluate polynomials—substitute the given value for the variable into the polynomial, and then simplify.

In the following exercises, determine if each of the polynomials is a monomial, binomial, trinomial, or other polynomial.

Determine the Degree of Polynomials

In the following exercises, determine the degree of each polynomial.

In the following exercises, add or subtract the polynomials.

Evaluate a Polynomial for a Given Value

In the following exercises, evaluate each polynomial for the given value.

ⓐ After completing the exercises, use this checklist to evaluate your mastery of the objectives of this section.

ⓑ If most of your checks were:

…confidently. Congratulations! You have achieved the objectives in this section. Reflect on the study skills you used so that you can continue to use them. What did you do to become confident of your ability to do these things? Be specific.

…with some help. This must be addressed quickly because topics you do not master become potholes in your road to success. In math, every topic builds upon previous work. It is important to make sure you have a strong foundation before you move on. Whom can you ask for help? Your fellow classmates and instructor are good resources. Is there a place on campus where math tutors are available? Can your study skills be improved?

…no—I don’t get it! This is a warning sign and you must not ignore it. You should get help right away or you will quickly be overwhelmed. See your instructor as soon as you can to discuss your situation. Together you can come up with a plan to get you the help you need.

Previous Topic
Back to Lesson
Next Topic
Login
Accessing this course requires a login. Please enter your credentials below!
Lost Your Password?